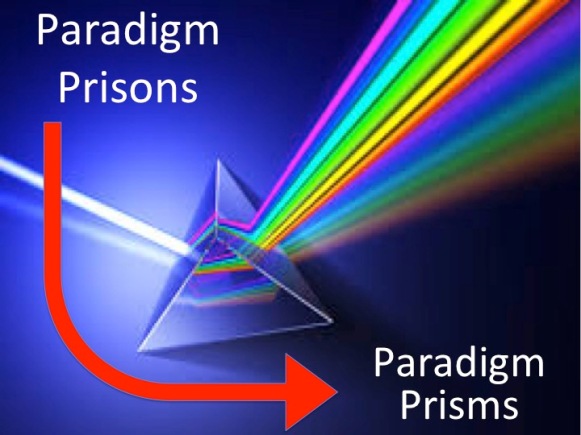 We are one of seven billion people in this world and each one of us sees the world from our own paradigm. This short blog post will examine the dangers of getting imprisoned in a paradigm and the benefits of becoming a prism as prisons are restricting and prisms are reflecting.

For example, when it comes to a decision of buying a family car, each family member would look at the decision from a different paradigm. The father might look at technical performance and fuel efficiency, the mother might look at the spaciousness and colour scheme, the teenage son might look at how classy it looks and how fast it can go and the teenage daughter may not care about any of this. When each family gets prisoned in their paradigm, they will not be able to come out of it to look at the decision from other paradigms, leading to possible misunderstandings, conflicts and even permanent damage to the quality of relationships.

Therefore the question is, how do we get out of the paradigm prison?

I suppose the first step is to be aware that we all look at the world from our own paradigm and there could be 7 billion plus paradigms, which are so different to each other. The second step is to accept that each perspective is valid from the paradigm it comes from. The third step is to realise that our options of dealing with a situation increase when we are able to look at it from different paradigms. The fourth step is to realise that the level of tension and stress in our life reduces when we are able to look at situations from different paradigms as it reduces the need we have to prove that we are right and someone else is wrong. It helps us to have more empathy. The fifth step is to realise that looking at a situation from another person’s paradigm helps better understanding and relationship building. The sixth step is to take some steps to practically learn about the validity of the suggested steps. The seventh step is to reflect and reflectively write about the experience to help inner change happen.

Going back to the example in the second paragraph, the father could step in to the shoes of his teenage son and understand why he wants a classy looking fast car. Asking some questions with regard to the thinking behind this desire can help get in to the new paradigm. Perhaps he could go back to his teenage years and ask how he would have looked at a family car purchase. He could then have a conversation with his teenage son from the new paradigm. This process might also help his teenage son see the decision from his fathers’ paradigm. Once he repeats this process with all the family members, he may be rich with knowledge and options and perhaps buy a car, which can satisfy the needs of all the family members at least to some extent, and chances are everyone will be satisfied with the final decision. This process helps the father become a paradigm prism that converts the challenge in to multiple options as a light is converted in to the seven colours of the rainbow by a prism.

And finally before you run away with this idea, do remember that this paper too is written from one of many million paradigms with regard to this topic. Be open to new perspectives based on various paradigms and finally create your own viewpoint that comes from your current paradigm. Also remember to keep looking at this idea from different paradigms and let your paradigm evolve while becoming a paradigm prism, someone who can show the various paradigms for any given situation.